THE EXPRESS TRAIN TO PRISON 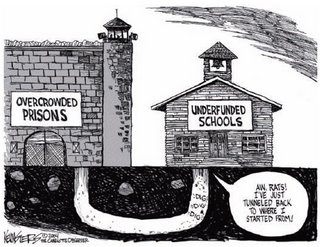 For a number of years we've been hearing about increased disciplinary practices in schools and zero tolerance policies. We often read about strange cases of a kid tossed out of school for amazingly minor action.

More than five years ago a major study found that:

"There is some tendency to assume that these suspensions or expulsions for trivial incidents are simply idiosyncratic or aberrations that occur in districts characterized by an overzealous administration. Yet the ubiquity of these "trivial incidents" across time and location suggests that the over-extension of school sanctions to minor misbehavior is not anomalous,but rather is inherent in the philosophy and application of zero tolerance."

"The most frequent disciplinary events with which schools wrestle are minor disruptive behaviors such as tardiness, class absence,disrespect, and noncompliance. A broad policy that seeks to punish both minor and major disciplinary events equally will, almost by definition, result in the punishment of a small percentage of serious infractions, and a much larger percentage of relatively minor misbehavior. We might expect then that the "trivial incidents" connected with zero tolerance will not abate, but may even accelerate as those policies continue to be extended by local districts."

The predictions of the report have certainly come true. The enactment of zero tolerance policies related to discipline in school districts has contributed to a significant increase in the number of children who are being suspended and expelled from school.

Pedro A. Noguera, Ph.D., professor in the Steinhardt School's Department of Teaching and Learning at New York University tells the following story of the shocking belief system of one school administrator.

"Not long ago, I was taken on a tour of an elementary school in northern California by an assistant principal. The purpose of my visit was to learn more about the ways this school was implementing a grant designed to increase the provision of social services to students, most of whom came from a low-income, economically depressed neighborhood. As we came to the end of the tour and walked toward the main office, the assistant principal shook his head and pointed out a boy, no more than 8 or 9 years old, who was standing outside the door to his office. Gesturing to the child, the assistant principal said to me "Do you see that boy? There's a prison cell in San Quentin waiting for him." Surprised by his observation, I asked him how he was able to predict the future of such a young child. He replied "Well, his father is in prison, he's got a brother and an uncle there too. In fact, the whole family is nothing but trouble. I can see from how he behaves already that it's only a matter of time before he ends up there too." Responding to the certainty with which he made these pronouncements, I asked "Given what you know about him, what is the school doing to prevent him from going to prison?"

I could tell by his flustered response that the assistant principal was surprised by my question. He did not think it was his responsibility to keep the child from following a path that would lead to prison. In fact, he informed me that he was preparing to put this child on an indefinite suspension from school."

I do know from experience that schools today can be damn chaotic. I don't pretend to have answers to how to deal with the many problems faced by teachers and other educators.

I do know however that lumping minor disciplinary problems with major criminal acts and that putting kids on the express train to prison is not a good idea.

The following article is taken from the New Standard.

Youth- and civil-rights advocates are speaking out against the rising presence of cops on campuses and administration complicity in what critics call a school-to-prison pipeline.

July 14 - The testimony of Florida parents and young people compiled by the NAACP Legal Defense Fund is alarming.

Fifteen-year-old Latia Smith said she was a bystander during a fight at school between two girls when a police officer threatened her with arrest, grabbed her and dislocated her shoulder.

The ten-year-old son of Latrell Brassfield was arrested at school for "disruptive behavior."

And five-year-old Ja'eisha Scott was arrested, handcuffed and put in the back of a patrol car for hours for having a temper tantrum.

From Florida to California to Connecticut, students and parents across the country are contending with an education system that is increasingly implementing harsher methods of disciplining students, and placing thousands of armed officers on school campuses. Youth and civil-rights advocates call the growing presence of law enforcement in schools, along with increasingly punitive punishment for misbehavior, the "school-to-prison pipeline."

Damon Hewitt, assistant counsel at the Legal Defense Fund (LDF), says schools started by implementing "zero tolerance policies" resulting in mandatory suspensions or expulsions for certain infractions. "But what we see now are next-generation policies that more often than not involve significant police activity on school campuses," he said.

The April LDF report looked at arrests and suspensions of children in six school districts in five different Florida cities. Co-written by the NAACP and the Advancement Project, a national advocacy group that provides legal and research assistance to local communities, the report compiles state Education and state Justice Department data with testimony from parents and youth.

According to the Florida Department of Juvenile Justice, out of 28,008 school-related referrals to the department in the 2004-2005 school year, the most serious offense for 63 percent was a misdemeanor.

The LDF report chronicles dozens of stories of police using excessive force when arresting children for these offenses. One of the most egregious cases was in Duval County, in which police - in front of TV cameras - arrested, handcuffed, shackled and took to jail twelve black high-school students for allegedly stealing $60 worth of soda and food from the cafeteria. The report states, "While it appears that students of other races were involved in the incident, only black students were interrogated and arrested by police officers two days later with little to no evidence to support the arrests."

Campana told The NewStandard that because many police officers are used to "clearing the call" - responding to and resolving complaints as quickly as possible - his organization tries to "slow [officers] down and get them in touch with kids and how to interview kids and how to work with them."

Hewitt of LDF says the origins of the school-to-prison pipeline are found in the prison-industrial complex - the privatization of prison and related services that has accompanied a dramatic rise in US incarceration rates.

"I think it's no coincidence that society is getting more and more punitive," Hewitt told TNS. "But on top of that, the people who end up in prison are those who are excluded from a mainstream school environment as youth - the folks for whom quality education is just kind of a cruel illusion."

Hewitt explained that as students are punished more severely for common misbehavior, they are often taken out of the classroom and relegated to inferior education settings or even in and out of juvenile detention. He said the people affected are the same populations as those disproportionately incarcerated as adults: blacks, Latinos and low-income whites.

"And to be clear, we're not talking about children who are bringing guns and knives and drugs to school," Hewitt said. "It's not the activity that's changed among the students, it's more our responses that have changed over the last few decades."

Youth in New Haven, Connecticut, frustrated by what they said was unfair treatment of students, are currently screening a short film they made last year with the help of Youth Rights Media, an organization focused on young people's empowerment.

"I had not heard the phrase 'school-to-prison pipeline' before you folks contacted us," says an attorney interviewed in Book 'Em: Undereducated, Overincarcerated. "And yet it completely crystallizes something I've been really angry about a really long time."

Ashley Burney, videographer and interviewer for Book 'Em, said although she has not been suspended herself, she's seen her friends receive five- or ten-day at-home suspensions for merely walking in the hall without a pass or for insubordination. She said school officials use suspensions as a "first resort rather than a last resort."

Meanwhile, across the country in South Los Angeles, youth and parent advocates have documented similar examples of extreme disciplinary action for minor infractions that have resulted in a ballooning rate of suspensions and dropouts.

Maisie Chin is co-founder of Community Asset Development Re-defining Education (CADRE), an organization that formed in response to the mistreatment of both parents and students in the education system. She says the dropout crisis is really a "pushout" crisis, stemming from suspensions, harsh discipline and disrespect by teachers and other school officials.

"[If] the teacher has it out for you and is humiliating you in front of your peers, you're going to stay out of that class and eventually you're going to stay away from school," Chin said. "And you know, when this is happening in middle school, the chances of you graduating from high school are already reduced."

In the past, school officials commonly dealt with minor infractions using detentions, extra homework, or counseling measures that permitted the student to remain in the classroom.

After conducting surveys with parents and students about their treatment by school officials, CADRE recently issued a report and "call to action" last month documenting what the group calls human-rights violations in LA Unified School District 7. The report's findings stated that teachers and administrators mistreated students during the suspension process, using name-calling, teasing and hostility, sometimes in front of parents or other students.

Researchers also found that school officials violated students' right to due process, failing to listen to accused students' side of a story or to interview student witnesses. CADRE also found that parents were humiliated and disrespected by school staff and rarely given the opportunity to advocate on behalf of their child.

"The problem is," said Chin, "it's difficult to substantiate all of this. Because, one, there is a denial of the practices. Two, there's a denial of the correlation because it's seen as individual behavior problems or individual failings of parents. And that's what Â… CADRE is trying to debunk, is that there are intentional practices by schools that are employed to get rid of certain children that don't fit the agenda the school has."

One way the LA district accomplishes this is through "opportunity transfers," in which students are forcibly reassigned to another school. Chin said students are also "counseled out," when administrators urge them to transfer to "alternative schools" or even to drop out. According to CADRE's survey of 50 parents and 120 young adults who left regular high school before graduating, nearly half stated that they were asked to leave their regular high school.

LDF's Hewitt said their research in Florida indicates a similar trend of "perverse incentives to push children out of school." Pressure by school administrators to exhibit high performance, pressure from the No Child Left Behind Act to avoid being labeled "persistently dangerous," and pressure on teachers who receive so-called "merit based" salary increases as reward for producing good statistics.

"So teachers know that certain students are struggling and they may not achieve at a very high level, at least without very focused individualized attention," said Hewitt. "then there's every incentive for teachers or school administrators to make these students someone else's problem, to push them into [general equivalency diploma] programs, to push them into alternative education."