PORTLAND: THE CITY SAYS "MOVE ON," THE HOMELESS SAY "HOLD ON" 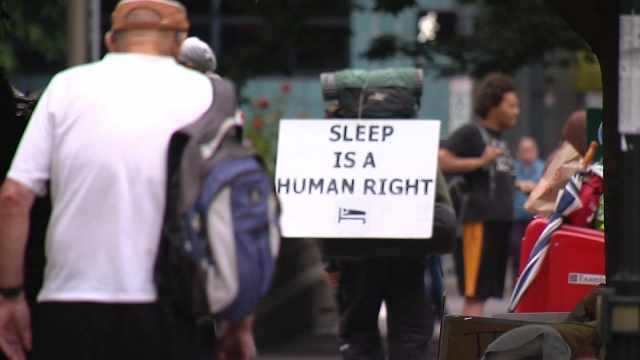 You hear people complaining about homeless folks clogging up sidewalks, parks, and urinating in public all the time.  Well, my question is if you are homeless what exactly are you supposed to do?  Where is it okay to stand or sit or sleep or piss?  Maybe you are just supposed to stay awake, keep moving and hold "it."  I don't know.

Listen I have worked on the streets and I have been in shelters, and yes, there are some people in the shelter/homeless industry with fine big hearts, but, I'll tell you what, given my druthers, and depending on the weather I would stay out of those shelters most of which are dangerous, most of which have more rules then your high school, most of which send you packing at the crack of dawn, most of which are just no damned "fun."

There are answers, even answers short of the total overthrow of the whole damned system of capitalism which would suffice in the short term.  I used to be involved with some folks from the National Union of the Homeless.  They were homeless people taking care of themselves and of each other.  They weren't a bunch of social workers and government employees who didn't really get it and who really thought of themselves as a different branch of the human species altogether .

I've slept on porches and found myself moving from day to day looking for a place to crash.  I was lucky.  I had friends who would put me up for a short time and my period of this didn't last all that long.  Even with that I in no way claim to really understand what it is to be homeless, not really.

Meanwhile in Portland Oregon, the city of the Roses, their is a battle going on between the homeless and the city.The city keeps driving the homeless "away" and the homeless keep finding another place to be until the city closes in on them again.

Greg Malroy, one of a group of half a dozen homeless found a site tucked under a tinder dry bluff near some homes.  the cops showed up and set up no camping signs.  they told the group they'd be back in the morning.  They told the group to move on.

"They usually give us 72 hours notice, but this time they gave us 24 hours notice," Malroy told Oregon Live. "They told us it was private property and there was a fire hazard here."

Malroy said he, another man and three women moved to the bluff after police rousted them from below the Fremont Bridge at Northwest 19th Avenue about a week ago.


"They just keep moving us," he said. "They've been cleaning up all over town."

...the city's estimated 1,700 homeless people are part of a long tug of war between city officials, homeless advocates and police. The issue roared to the forefront when Mayor Charlie Hales announced last month that he'd had enough of the behavior of dozens of people camped outside City Hall.


(Two weeks ago), police arrested five protesters there and police said they would begin to more rigorously enforce the city's camping ban everywhere, not just on city sidewalks.

While Portland police carried out Thursday's camp removal, city park rangers removed 984 homeless camps in 2010, then with increased patrols keeping numbers down, 684 camps in 2011 and 500 in 2012...


Malroy said the group did its best to keep their camps clean. He said they weren't drug users, didn't drink but were forced onto the streets by medical problems that prevent them from working. Malroy's criminal record is for non-violent crimes, including arrests for drugs and car theft, according to state court records.

"We're all trying to get disability and get housing, but they won't give you housing unless you have a fixed income," he said. "So we're kind of stuck out here."


In July Mayor Charlie Hales told homeless camping in front of city hall to move on.


The Willamette Week wrote at the time,


Portland Police officers quietly posted metal signs in front of City Hall Friday evening outlawing obstruction of the sidewalk along Southwest 4th Avenue—in effect serving an eviction notice to the homeless encampment that has swelled to more than 40 people in recent weeks.


This in response to complaints from Portland citizens and a drumbeat of bull from media outlets.

The homeless and supporters weren't impressed and vowed this time to fight.  They set up an occupy like protest.  Eventually though they were forced out and regrouped in a federal plaza.

Again from the Oregonian:

Mayor Charlie Hales boldly declared last week that enforcing sidewalk laws against people experiencing homelessness — and we assume the mentally ill — wasn’t about homelessness at all. “This is about lawlessness,” the mayor proclaimed to the media.

The mayor doesn't get it.  He wants all these people to move on and on some more.


Not one mention of the public health crisis on our streets or the lack of funding for homeless or mental health services. Nothing was mentioned about how the business community, residents, local government, advocates, social-service providers and law enforcement can work together to tackle these tough problems. Not a peep about an increased investment for rent assistance to target some of the hard-to-reach folks on our streets.


The message sent to the media and Portland was simple: We’re cleaning up lawless behavior that we’ve tolerated for far too long.


Street Roots and others saw years of hard work about how to frame this issue to get common Portlanders to engage in working together to solve homelessness flash before our eyes.


Then the police went out and swept homeless camps.


Sitting quietly in the background are lobbyists for the business community who are pushing an agenda to government and the media that tourism is hurting and the business climate is threatened because of the visible homeless downtown.


Meanwhile, anyone walking through Portland’s core would see tourism and business booming.


The solution is to work together to develop strategies to increase our affordable housing stock, to increase rent assistance dollars for people on the streets, and to maintain targeted enforcement on people who are clearly out of line. The solution is not to enforce decades-old perspectives that research and history have shown do absolutely nothing to solve the problem of poverty and homelessness in urban America.


What Portland needs are leaders who listen to experts in the field and in government that have been successfully housing people for years.


Street Roots is ready to work alongside both traditional and non-traditional partners to get the job done. What we can’t do is sit on the sidelines and watch individuals and families in poverty be demonized in our community.


Housing stability makes economic and social sense. Everyone deserves to have a safe place to call home, regardless of circumstances, and everyone benefits when they do.


The real solution goes beyond this, in my mind, and any solution temporary or otherwise must be one that involves the homeless themselves in the decision making process, not just the "experts" referred to above.  In the meantime, some squatting, some occupations, some takeovers of some abandoned buildings and the like, and yes, the use of public parks and plazas is in order.


Today the police moved the people out of that Federal Plaza, at least, temporarily.

The following is from Right to Dream.

On July 11th, 2013, Willow spoke brilliantly before the city council - here is what she said:


Hello, my name is Willow Frost, and I'm houseless. I became a member of Right 2 Dream Too in March, and since then, I've learned a lot concerning the homeless population of Portland. The first being this: sleep is a biological need that cannot and will not be denied forever.

According to the Point-in-Time count of homelessness done in Multnomah County, there are 2,869 people who meet the definition of "literally homeless". Literal homelessness is defined by the federal department of Housing and Urban Development as "any person sleeping in an emergency shelter, sleeping in a motel provided by a voucher, or without shelter." Of this number of people, 1,895 are not receiving shelter.

To make this a clearer picture, that is 66% of the homeless population - living, breathing people who have a need for sleep - huddling under whatever shelter they can to stay out of the rain, or trekking to an inconvenient location to keep from getting woken up by police officers. Some of these locations make it difficult to come back into the city to look for work, go to school, or even just to receive services for food and showers.

My last point aside, sleep is obviously a very important thing for the human body. A study performed by the San Diego based University of California showed that sleep deprivation can cause slurring of speech, loss of coordination and manual dexterity, loss of cognitive function, delayed or interrupted perceptive ability, and in cases of prolonged or repeated sleep deprivation, mania and hallucinations.

If this list of symptoms sounds like reasons police confront a person for suspicion of drug use, that’s because it is. In many cases, a police officer will wake up a homeless person, tell them to move on, and that person will begin their day. Many times this means a person is getting less than four or five hours of sleep in a night, and in some cases less than two or three. And then, when those people who were denied rest by the police begin to exhibit these symptoms, they stand less of a chance to get a job, be able to pay attention in school, or even function in the general society. They even stand a chance of going to jail because of mental and physical symptoms caused by lack of sleep.

As I stated before, sleep is a biological imperative. It’s going to happen whether it’s legal or not, and I personally would rather see a person sleep safe and away from traffic, than to see them pass out while crossing a street. I would also prefer to see a person sleeping at Right 2 Dream Too, instead of out on the sidewalks where they stand a chance of being entered into the vicious cycle I previously mentioned.

Right 2 Survive, and by direct action, Right 2 Dream Too, are filling a role that is sorely needed in Downtown Portland. The need for a grassroots organization catering to homeless people, run by the homeless, formerly homeless, and their allies to keep people off the streets, teach them their rights, and extend a warm, welcoming hand that says “Yeah, you might not have a home, you might be in a really bad spot right now, and you may think you have nothing. But guess what? We’re here for you. It’s not gonna be easy, but let us help you help yourself. Come in, sleep for twelve hours, have some food, then go about your day. And at the end of it, come back. We’ll welcome you back with open arms.”

Currently, the City is fining us. I won’t claim to be able to quote the exact amount, but it’s confusing to me that the city would be opposed to an organization that can, in a 24 hour period take up to 90 of those 1,895 non-sheltered people that I mentioned before, and give them a place to sleep without worry. I would appreciate, as I’m sure would the entire homeless community, if the City would re-evaluate its response to, and actions toward Right to Dream Too, and possibly even look into approving more organizations like us."

Photograph is creative commons from the internet.