YOU CAN GET ANYTHING YOU WANT AT ALICE'S RESTAURANT (EXCEPTING ALICE) 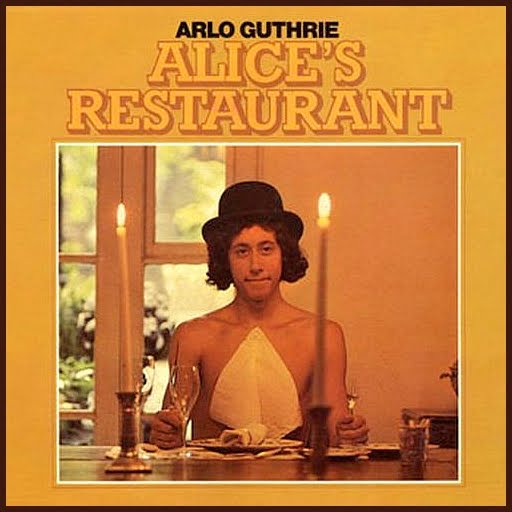 Okay, it is sappy, naive, nostalgic, a bit childish, rather simple and quaint, and not exactly deep, but what the hell...even I can be those things once in a while...

The following is from Common Dreams.


A Thanksgiving Ritual for '60s-Style Activists

Out here on the left fringe of ‘60s - style activism, we don’t go in much for ritual. We lefties are about freedom, innovation, always finding a new and better way to do things.

Still, there is something to be said for ritual. Repeating the same activity year after year creates an illusion that things never change, that we can turn back the clock for a moment and pretend things are still the way they used to be. So I’m going to repeat a column I’ve published several times on Thanksgiving. It’s my own little ritual.

Even if you are one of those ‘60s - style anti-ritualists, I bet that on Thanksgiving you do some kind of ritual, something old and familiar, too. Maybe you gather with the same folks you share dinner with every Thanksgiving. Maybe you fix the trimmings in the same way as always. Or maybe, like so many of us, you sing along with Arlo.

No, we don’t really believe that we can get anything we want at Alice’s Restaurant, excepting Alice. But it takes us back to a time when we believed we might get anything we wanted, even though we wanted the world, and we wanted it now! Everyone we knew really could imagine fifty people a day walking into the draft board, singin’ a bar of Alice's Restaurant and walking out, creating the Alice's Restaurant Anti-Massacre Movement. And all we had to do was sing along the next time it came around on the guitar.

Isn’t that why so many of us wait eagerly each Thanksgiving for it to come around on the guitar? It isn’t just to recapture our lost youth (though perhaps there is nothing wrong with that). It’s also because we were young at a very special time, when it seemed that the whole world would soon shed its aging body, worn down by war and greed and dehumanization, and regain its lost youth.

Soon, we believed, the whole world would be full of loving people who would take out the garbage whenever it needed to be taken out, bring it down to the city dump, then go back home to have a dinner that couldn’t be beat. And not just on Thanksgiving, because we believed that every day would be Thanksgiving. Every day we would feel awestruck and thankful for the little miracles of life, like sharing food and song with people we love. Every day, we would do just a bit more to right the world’s wrongs, to make sure that justice was really blind. And all the while, we would remember to laugh and play with the pencils there on the Group W bench.

Well, it hasn’t worked out quite that way, yet. The world keeps doing all kinds of mean, nasty, ugly things. But kid, it’s never too late to “rehabilitate” yourself, to start once again creating enough of a nuisance and singing loud enough to end war and stuff. If you’ve been doing it for 40 years, or more, I bet you are prepared to do it for another 40 years. I bet you still have high hopes that we can “REHABILITATE” the world. I bet you’re not proud, or tired.

The first time I published this column, I got a thank you note from Arlo Guthrie himself. Really. If you’ve got his email address, please send this column along to him and tell him we are all proud that he’s not tired, that he’s still walking on stage and singing that chorus of Alice’s Restaurant, along with all the wonderful verses.

Who knows what might happen this time. The golden age of the 1960s is long gone, but anything is still possible. So perhaps you can get anything you want, as long as you remember to sing it the next time it comes around on the guitar -- with feeling. Because it is, indeed, a movement: The Alice’s Restaurant Let’s Give Thanks and Remember Why We Started Doing This and Why We Keep On Keepin’ On Movement.

Ira Chernus is Professor of Religious Studies at the University of Colorado at Boulder and author of Mythic America: Essays and American Nonviolence: The History of an Idea. He blogs at MythicAmerica.us.
Posted by Oread Daily at 4:50 PM

I have an incredible free gift for you today, and best of all you can download this for free right now and use it to program your brain to MANIFEST you your DREAM life...

It includes a special report, a short video, and an mp3 audio file.

The audio file is just 5 minutes long but it puts you in a state of relaxed meditation very quickly, because contains it powerful brain entrainment technology combined with abundant affirmations designed to manifest your dream life for you...

...Without hard work or struggle.

Whether your wish is for more wealth, success, happiness, better relationships, good health... Make sure you download your kit while this is still available:

Don’t miss this, make sure you have a listen to the 5 minute mp3 and start reading the book right away.

P.S. Here’s the link again, this is going to feel like a rush of excitement, surging through your chest. You’ll finally manifest the life that was meant for you, your dream life...