IRISH WORKING PEOPLE TAKING ON AUSTERITY WITHOUT OR WITHOUT UNION BOSSES

They aren't happy with the plan in Ireland...the austerity plan.  Up to 20,000 people took to the streets of Dublin on Saturday to say it's time for a new plan.

The demonstrators were led by activists from the Spectacle of Defiance and Hope, including a young woman wearing a white mask and riding a dark horse with a banner reading "No to austerity" draped around it.

The march – organized by the Campaign Against Household and Water Charges, the Dublin Council of Trade Unions and supported by the Irish Congress of Trade Unions (Ictu), Siptu and other trade unions – was joined by members of People Before Profit alliance, Sinn Féin and the Socialist Party and organisations including the Irish National Organisation of the Unemployed.  Regional and community grojps and organizations also participated.

The Irish Times quoted a number of march participants:


Karen Doyle from Cobh, Co Cork
“We are largely either being ridiculed or ignored, I feel. Hopefully today we will start to get our message across as we are all joined together, all the various groups are joined together. Austerity is not working. It’s not working for couples, it’s not working for families and the most vulnerable in our society are suffering and we all know this. It’s about time now everybody stood up.”

Frances McDaid from Ramelton in Donegal
“I have a family of seven and they built houses, now they’re going to ask them to pay taxes on those houses that they built. They never got anything in their lives, they worked all their lives to build houses . . . and they’re losing their jobs, they have no money. That’s why I’m here, for the young people of Ireland to try and make the Government realise we should be keeping them here instead of taxing them out of it. It’s a disgrace . . .”

Wesley Fitzgibbons from Dublin who attended the march with his son Liam (4)
“I’m a fitter by trade and I just can’t take any more cuts. We just feel that the Government just keeps hitting the middle working class all the time. Theres nothing else there to take. People are working a lot more hours trying to make ends meet and at the end of the month were just barely scraping by.”

Kay Wilson, a member of the National Association of Widows in Ireland, from Dublin
“We’re out at every march here and I don’t think Ministers are listening . . . If you’re depending on your pension alone which a lot of people are. It doesn’t go very far. If they were to give me the €100,000 that some of them are earning and I’ll give them my €200 and see how they’ll manage on that a week.”

Paul Murphy from Ballinrobe, Co Mayo
“I’m constantly active in various campaigns because basically what’s going on is a massive representation of systemic injustice. Our socioeconomic system is completely in favour of those who are most wealthy . . . for example we have a situation, which is actually unbelievable, where this year we are paying out almost €20 billion of public money unsolicited to unsecured bondholders . . . I see it as a theft.


Richard Barrett of People Before Profit and the United Left alliance, said the protest should be the start of a national campaign.  Quoted in the Belfast Telegraph, he said,

It is abundantly clear, that half of the population if not more, simply cannot take it anymore.

The fabric of our society and our economy is being ripped apart. This madness has to stop. We must cease immediately the insane policy of prioritising the interests of banks and markets over the needs of ordinary citizens.


There were also calls for a general strike from the crowd.  Something that is oft easier said then done...as it were.  And not everyone was thrilled with the trade union leadership...and they were denounced in return by those leaders.

The following is from the Workers Solidarity Movement. 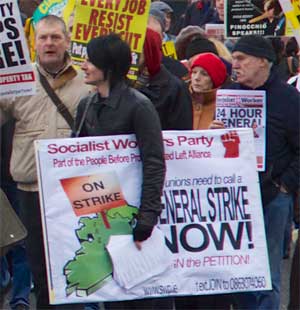 The numbers at Saturday’s anti-austerity march were impressive given the relatively low key build up, but what was more impressive was the militant mood of the protesters. This was exemplified by the booing and heckling of ICTU president Eugene Mc Glone with chants calling for a General Strike. Mc Glone, in the style of a seasoned professional union official managed to pick himself up and give a speech which though cynical in delivery, bore more than a grain of truth that the radical left should not dismiss out of hand.
The gist of the ICTU president’s speech was that you can’t just pull a general strike out of a hat; you must build for it and win support in your union and in society in general. It should not be just “called” by those at the top of the unions but fought for by the rank and file. In this context, Mc Glone correctly showed that the slogan of “general strike now” is little more than ultra-left rhetoric.
The cynical side of Mc Glone’s argument though is that the bureaucratic nature of Ireland’s trade union movement makes this process incredibly cumbersome. The time it takes from when you get a motion passed by your union branch to the time it gets passed by your annual conference can be over six months. At every step of the way you will have professional officials and long-time junket chasers blocking your path, using scare tactics to ensure that your motion never gets off the ground. Even if in one union we manage to overcome those obstacles, we need to face the exact same in several of the big unions for a motion calling for a general strike having any chance of getting passed by the general council of ICTU.
It would be easy to blame this state of affairs solely on “bad leaders” like Jack O’Conner and David Begg or a conservative union rank and file but beyond the black and white pictures painted by both the radical left and the right wing bureaucrats is a reality that encompasses many colours and shades.
The union leadership did not fall from the moon. It reflects the objective situation we find ourselves in after years of economic boom and social partnership. Large sections of the workforce found themselves in a position of comfort that made the idea of rocking the boat seem ludicrous. The net effect was that a once vibrant and comabitative trade union movement fell victim to demobilisation and complacency. A gulf opened up between the membership and the leadership and all that was left in between was the junket chaser and the radical left, neither of which spoke directly to the experience of the rank and file.
A prime example of this is the workforce of Tara mines on the outskirts of Navan, a town that once was famous for industry and trade union militancy. During the 1970’s and 1980’s a series of strikes at the mines led to pay and conditions that meant that getting a job there was like winning the lottery compared to the “options” of unemployment and emigration. By 2001, social partnership had taken such a toll that when the mines closed for six months citing economic instability cause by 9/11 as the reason (even though Outokumpu, the multinational that then owned it was able to boast huge profits on its website), the only response that SIPTU could muster was to hold a march through the town. Since then, a series of changes in work practices and wage cuts have eaten away at the gains brought about by the militant workers of yesteryear.
That the union bureaucrats happily encourage this situation should come as no surprise. Social partnership gave them a privileged place in society, very well paid jobs and a seat at the table with government and employers. The majority of the left on the other hand, though it bemoans the role played by these leaders, simply perpetuate the clientelist union model by trying to replace them with others who are a bit more to the left, as if a few more radical people at the tops of the unions can substitute for class consciousness and militancy. The net result is that rather than building steadily towards a trade union movement that has the confidence and ability to fight against austerity, we set course on a series of short-cuts that lead into one cul-de-sac after another.
Even if we did manage to win over enough union executives to set the wheels of a strike wave in motion, the rank and file would be woefully unprepared for this. Strikes would be seen by many as simply another day’s pay lost. Indeed without rank and file militancy a general strike would only be a glorified day of protest. The government and IBEC would have little to fear from a 24 hour stoppage or two if it was just a matter of business as usual the next day. Indeed, the government might cynically see it as a chance to save a few quid in public sector pay.
The good news is that the militancy on show on Saturday, despite Jack O’Connor’s loaded comments that it was ULA and Sinn Féin supporters heckling McGlone, came from a broad spectrum of people. There is a basis for building class consciousness and rank and file militancy, but there are no short cuts. Empty sloganeering and mirroring the approach of the bureaucracy will get us nowhere. If we are to build this movement, if we are to build towards a general strike, we need to lay foundations in every workplace and every community and we need to ensure that no one is under any illusions that this will be an easy fight.
Posted by Oread Daily at 3:42 PM