"...AS SWEET AS THE SMELL OF BBQ RIBS AND CONRBREAD AND SWEET POTATO PIE" 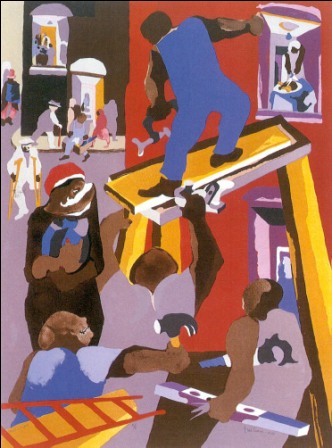 Tired of the same old Scission.  Today will be different.  This isn't a big news story, or even a little one.  This isn't some in depth analysis or some long winded theoretical piece.  This is something else.  It is a little sad at first and a little happy at last.  It's a tale of the San Francisco Bay, but for the vast majority of us who do not live there it likely will still ring true.

Of course, you might have to ride the bus...

The following is from Poor Magazine/Prensa Pobre..

If you’re a native San Franciscan you know the sound. It’s as sweet as the smell of BBQ ribs and cornbread and sweet potato pie when the city had soul food restaurants all over with black folks cooking in black kitchens on black grills with black pots and pans bubbling music in the background, in the foreground—all over. Imagine that, black folks cooking soul food in a soul food restaurant—not like what you see when you walk in the city today. The black and brown laughter I grew up with was nourishment, it told me where my mother and father had been, where my ancestors had been, it told me who I was. Black and brown laughter, like the smell of adobo, tortillas and rice, chow mein—nourishing us and keeping us fighting for things that mattered—our elders and children and community; black and brown laughter, the sound of struggle, the sound of strength—the sound of legacy; the laughter of our skin, with the scars and sweat filling the air with the fragrance of our lives. San Francisco, where is the black and brown laughter? All I hear is empty chatter, tinny voiced cell phone code, no laughter, no music, no nothing.
But sometimes you hear it. It comes like a friend who knows you, who’s glad to see you. And the beautiful sound came to me a couple days ago. I was on Muni heading home. I was anticipating a surly driver followed by a bus full of empty faces. The driver was a Filipino guy who grew up in the city—a Filipino who’d grown up in the barrio, the ghetto, the neighborhood. How’d I know? It was his voice and the way he tilted his head to the side. He said 4 words: How you doin’ brother? It was the voice of ungentrified Frisco, the voice of my father, my uncles—the voice of my life. I felt relaxed and alive, like I’d walked into my grandma’s old living room. He drove several blocks before coming to a stop. He rose from his seat to make way for the relief driver. The relief guy got on and the switch took place. It was an African-American brother, from the city too—I could tell by his voice, his laughter. The two drivers talked to each other, laughter of black and brown intertwined and beautiful. It was voices saying, “You ain’t right man” and “All right now” and “Man…you late again…what you doin’, starin’ at all the girls?” And the men looked at me and I said, “No, the brother was on top of it…he wasn’t lollygaggin’…fo’ real”.
And they laughed, their laughter drawing me in. I felt at home in a city that’s feeling less like home.
Posted by Oread Daily at 3:53 PM