AFGHANISTAN: WHERE WOMEN GO TO JAIL FOR "HOME ESCAPE" 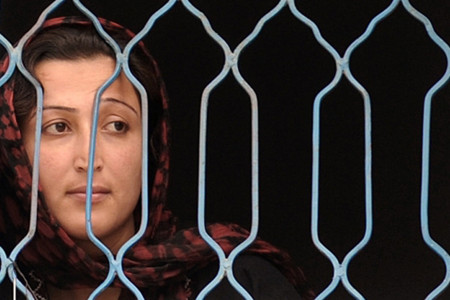 Would you believe that seventy percent of women jailed in Afghanistan today are accused of "home escape?"  Unfortunately you probably would.  This is what the war has been all about?  Give me a break?

The international women's organization Madre puts it this way:

Most women have no money of their own and are forbidden from leaving home without a male relative. Escaping abuse is therefore very difficult: running away is itself a crime punishable by death.

Human Rights Watch last march reported  about 70 percent of the approximately 700 female prisoners have been imprisoned for running away, nearly always for fleeing forced marriage or domestic violence (To see the report click here).  At a press conference following the release of that report local reporters displayed a shocking lack of understanding or a shocking amount of patriarchal attitude (depending on your point of view, I suppose):


One local reporter asked, “If this is not considered a crime and it becomes rampant in the society and everyone does it, don’t you think that in a society like Afghanistan it will lead to a kind of anarchism here and everything will get out of control? What will be the consequences?”


Several questions later, another local reporter closed his question saying, “I think that to prosecute running away with strangers, it helps families to be more organized and it fortifies the family relationships in Afghanistan, so I think it is better for Afghanistan to prosecute this crime.”


The human rights group was forced to again chide the government recently  as the NATO backed Afghan government denied that escaping one's home was a crime.  Human Rights Watch research in six prisons and juvenile detention centers has found that some 50 percent of women in prison and some 95 percent of girls in juvenile detention are accused of so-called "moral crimes."   According to Outlook Afghanistan:


HRW Asia Director Brad Adams said pardoning victims of unlawful imprisonment for running away does nothing to end this abuse. He added that President Karzai should issue a decree prohibiting all arrests and prosecutions for 'running away' and order the release of all women and girls currently imprisoned on this charge.

A previous HRW report said women and girls face a justice system stacked against them at every stage. Police arrest them solely on a complaint of a husband or relative. Prosecutors ignore evidence that supports women's assertions of innocence. Judges often convict solely on the basis of "confessions" given in the absence of lawyers and "signed" without having been read to women who cannot read or write. After conviction, women routinely face long prison sentences, in some cases more than 10 years.


Ironically, when it comes to Afghanistan’s interpretation of Islamic law regarding women who "run away free, " it  is the only Muslim nation to interpret such behavior as prohibited under Islamic law.


Earlier this month, President Karzai came out in support of a statement by a government-sponsored council of religious scholars that said women were not equal to men and should not mix with men in public. Explaining his support of the statement, Karzai said the council was not putting limitations on women, but rather was enforcing the Islamic law that binds all Afghans and Muslims.

The following is from RAWA.

“Forced marriages, difference in age of couples, violence, use divorce comments and several other issues are the main motives which forces Afghan girls and married women to flee from their homes.”

By Sadaf Shinwari
Chief of the parliamentarian commission for human rights, civil society and women’s affairs Fawzia Koufi expressed concerns regarding the Afghan women detainees where majority of them have been arrested for escaping their homes.

Fawzia Koufi said more than 70% of the Afghan women have been jailed for escaping their homes despite this is not crime in Afghan law.

She said, “This is a major issue and women are jailed over adultery after escaping from their home. If the government does not have a specific law in this regard then it should be referred to us in order to modify a regulation in a bid to clarify the rules and prevent misunderstanding and misuse by Afghan attorney and police regarding the Afghan women.”

Afghan justice minister along with the Afghan women’s affairs minister and deputy administration of the Afghan interior ministry also attended the session to discuss the ways on how to prevent jailing Afghan women who are fleeing from their houses.

Afghan women’s affairs minister Husn Banu Ghazanfar said jailing Afghan women over fleeing charges from their house is one of the major issues.

She said, “Forced marriages, difference in age of couples, violence, use divorce comments and several other issues are the main motives which forces Afghan girls and married women to flee from their homes.”

In the meantime Afghan justice minister Habibullah Ghalib said fleeing from home is not a crime in Afghan law and no case should be referred to Afghan courts in this regard.

He said, “Escaping from home is not a crime and this was discussed during sessions last year. The issue was also discussed with the chief of the Afghan Supreme Court which was approved and was sent to concerned organizations by Afghan Justice High Council.”

In the meantime deputy administrative of the Afghan interior ministry Gen. Mirza Mohammad Yarmand said women escaping from their homes without committing adultery are not a crime based on the crime law of Afghanistan.

According to reports majority of the Afghan girls and women are leaving their homes to prevent from violence however they are reportedly facing more issues once they flee from their homes and majority of them are not accepted by their family to return.