THE OLYMPICS: THE GOOD, THE BAD, AND THE UGLY 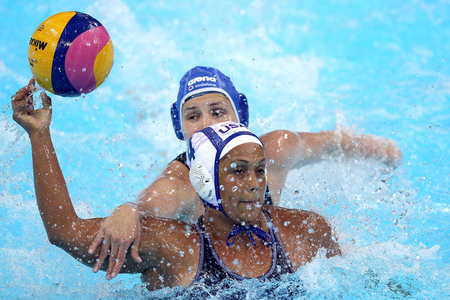 I confess I love watching the Olympics.  I know all the arguments about what they have become and what they represent and all that.  I get it, as the post below will demonstrate.  However, I still like to watch it.  I love swimming, since I was once a swimmer...maybe I should call myself a post swimmer.  Of course, I enjoy also the big events in track and field, basketball,  and all that.  I am doing my best to get into soccer like everyone else in the world outside of the USA has long been.  This time around I have been really finding fun to watch the "lesser" events," like water polo (that requires some fitness and endurance, I should say), field hockey (on water), indoor volleyball, archery and shooting, I want to see badminton, just because I can't believe it is an olympic sport.  Most of the time, I find the women's versions of the events the most true to the so called Olympic spirit, and the least ego driven (Please, don't make me here anything further about Michael Phelps).   Anyway, I enjoyed checking all the various channels, watching while reading...whatever.


Now back to the real world where Empire and global capital prevail over all.


The following is from Red Pepper.


Olympics: The Games turned upside down

The famous clenched-fists image of Tommie Smith and John Carlos protesting against black oppression at the 1968 Olympics is worth revisiting as London 2012 presents us with a regime of licensed private dictatorship, writes Mike Marqusee

In a world where the words ‘iconic’ and ‘icon’ have been so cheapened by overuse, it’s salutary to recall their original meaning. In religious use, an icon is a representation that is more than a representation, an image that contains a power beyond itself. It’s not merely familiar or typical (or self‑referential). It’s not a triumph of image over reality; it’s a deeper connection between image and reality, in which the former draws power from the latter.

That’s what makes the image of Tommie Smith and John Carlos on the podium at the 1968 Mexico Olympics that rare thing, a genuine icon. But its iconic power can only be reactivated, and the image saved from the banality of contemporary ‘iconography’, if we delve into the moment and its meaning, its background and its aftermath.

This is what makes The John Carlos Story (Haymarket Books) such a wonderful gift. Carlos’s intelligence, humour, ruefulness and righteous wrath make him a commanding observer and narrator. He’s sensitively aided by the cutting-edge socialist sports writer Dave Zirin, whose columns and books fearlessly explore race and class, money-power and media‑hypocrisy. Together, they’ve turned a sports autobiography into a powerful social testament.

From boycott to podium

Carlos explains how, in early 1968, he joined a handful of other elite African‑American athletes in the newly formed Olympic Project for Human Rights. The idea was to mount an African-American boycott of the upcoming Olympics in order to dramatise the continuing oppression of black Americans. Four demands were agreed: the hiring of black coaches (a crucial issue for the athletes, whose daily lives were managed by older white men imbued with racist assumptions); the restoration to Muhammad Ali of the heavyweight title stripped from him because of his refusal to take part in the war in Vietnam; the exclusion of apartheid South Africa and Rhodesia from the Olympic movement; and the removal of the head of the IOC, Avery Brundage – a long time white supremacist, going back to the days when he helped Hitler secure the 1936 Olympics.

Despite valiant efforts, the OPHR activists were unable to persuade many of their fellow competitors to sign up for a boycott; for most of them the Games represented a once in a lifetime opportunity. In the end, the OPHR activists decided they too would take part, and as a result of that decision Carlos, Smith and their allies found themselves in a position to turn the Games upside down.

In the 200 metres final, Smith won the gold in world record time, with the Australian Peter Norman in second, fractionally ahead of Carlos. With Norman’s support (he’s wearing the OPHR badge on the medal podium), Smith and Carlos staged their protest before a global audience. As the US national anthem played and the US flag fluttered overhead, the two African‑American champions raised clenched fists and bowed their heads.

As Carlos explains, the accompanying symbolism was hastily improvised: black gloves for black unity and strength, bead necklaces to remember the lynch mobs, black socks and no shoes for black poverty. But the message was unmistakeable – and profoundly provocative.

These were African-Americans who would not allow their success to be used to bolster America’s image, to imply that black people in America enjoyed freedom and equality. They repudiated this image as a sham, a cover-up, a false unity, and at the same time they posed against it a different solidarity, a higher unity. In so doing they dramatically subverted the core symbolism of the Olympic podium, where individual excellence is harnessed to national identity. It was a globe-spanning message in a globe‑spanning language.

As Carlos makes clear, the context was everything. It was 1968, and the wave of protest and repression had rolled through America and Europe and into Mexico City on the eve of the Olympics, when the military fired on protesting students, killing hundreds. In making their stand, Smith and Carlos brought the spirit of ’68 to the centre of the Olympic arena, breaching the citadel of sport, so often hailed as a haven from politics. They were able to do that because of their own relationship to the swelling currents of global activism. They knew that when they stood, they would not stand alone.

In narratives of the 1960s it is common to find the latter part of the decade, with its sometimes extreme and violent rhetoric, contrasted unfavourably with the earlier, more innocent and high-minded years. Many historians lament in particular the passing of the integrationist, nonviolent phase of the civil rights movement and its displacement by the militant black power phase.

They forget that this shift occurred because of the frustrations and failures of the earlier phase, out of which arose the need for a deeper, more systematic analysis as well as more effective forms of action. They also neglect the achievement of black power in releasing the self-reliant cultural energies of black performers – among them Smith and Carlos. Their protest was a flower of that movement and moment: a black nationalism with an internationalist vision, in which African-Americans were seen as members of a global community of the oppressed.

Smith and Carlos were expelled from the Olympic village and returned home to find themselves vilified. They were denounced as ‘black storm troopers’ who had disrespected their country and, most heinous of all, had shown a shocking ingratitude for all America had done for them. For years Smith and Carlos were treated as pariahs by the athletics establishment. There were no sponsorships, no coaching or media jobs for these world record beaters. To feed his family Carlos took jobs as a gardener, in a grocery store and an aluminium factory, and a stint in American football.

As the political movement that had inspired his action disintegrated, Carlos and his family were isolated. His marriage broke down. In 1977, after years of financial distress and mounting depression, his wife, the childhood sweetheart who stood by him every step of the way in 1968, took her own life.

After much struggle, Carlos found a rewarding life as a school guidance counsellor, though it’s only in the last decade that he and Smith have received the recognition they’re due. Carlos makes clear that the demons still haunt him, that there’s still unfinished business. Not least political business.

In his story, the narrative arc of trial and redemption so familiar from sports autobiographies and Hollywood biopics is invested with depth and realism – because it’s linked to a wider social struggle. The bravery was real and so was the suffering that followed. It is this history, feeding into and flowing out from the famous image, that makes the Smith/Carlos moment so deeply resonant and so enduringly relevant.

Since Carlos’s day, the Olympics, like so many other parts of the commons, have been colonised by global capital. At London 2012, the podium will serve as a symbol of the holy triad: individual competitive excellence, national identity and corporate overlordship.

As Carlos notes, the removal of the indigent from public view by the host city has become as much part of the Olympic ritual as the torch relay. Along with that has come the establishment of Olympic zones as licensed private dictatorships, in which rights to free expression and assembly are suppressed for the duration. An aggressive assertion of intellectual property rights, ruthlessly enforcing the corporate sponsors’ exclusive claims to the Olympic entity, will be matched by an unprecedented security clampdown, ensuring neither local residents nor protesters against corporate sponsors are able to disrupt the flow.

Like global capital, the Olympics have been cast as a juggernaut, an irresistible force with laws of its own to which we must all submit. In deference to that higher command, we’re told to swallow the exorbitant expense, the dubious ‘legacy’, the loss of rights, the trickle-up economics. We’re told to ignore the aching contrast between public austerity and Olympic extravagance. Despite the attempted lock down, the contradictions in the whole enterprise loom large, and one way or another, they’re bound to surface.
Mike Marqusee writes a regular column for Red Pepper, 'Contending for the Living', and is the author of a number of books on culture and politics
Posted by Oread Daily at 5:14 PM