I almost never post twice in one day anymore, but this is so truly staggering I had to make sure you didn't miss it.  I took it off The Guardian. 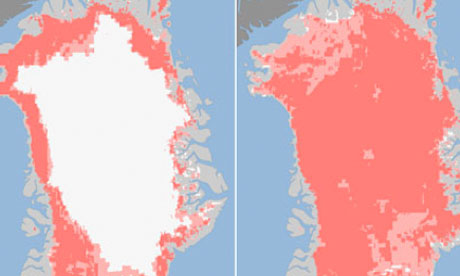 The Greenland ice sheet on July 8, left, and four days later on the right. In the image, the areas classified as 'probable melt' (light pink) correspond to those sites where at least one satellite detected surface melting. The areas classified as 'melt' (dark pink) correspond to sites where two or three satellites detected surface melting. Photograph: Nasa

Greenland ice sheet melted at a faster rate this month than at any other time in recorded history, with virtually the entire ice sheet showing signs of thaw.

The rapid melting over just four days was captured by three satellites. It has stunned and alarmed scientists, and deepened fears about the pace and future consequences of climate change.

In a statement posted on Nasa's website on Tuesday, scientists admitted the satellite data was so striking they thought at first there had to be a mistake.

"This was so extraordinary that at first I questioned the result: was this real or was it due to a data error?" Son Nghiem of Nasa's Jet Propulsion Laboratory in Pasadena said in the release.

He consulted with several colleagues, who confirmed his findings. Dorothy Hall, who studies the surface temperature of Greenland at Nasa's space flight centre in Greenbelt, Maryland, confirmed that the area experienced unusually high temperatures in mid-July, and that there was widespread melting over the surface of the ice sheet.

Climatologists Thomas Mote, at the University of Georgia, and Marco Tedesco, of the City University of New York, also confirmed the melt recorded by the satellites.

However, scientists were still coming to grips with the shocking images on Tuesday. "I think it's fair to say that this is unprecedented," Jay Zwally, a glaciologist at Nasa's Goddard Space Flight Center, told the Guardian.

The set of images released by Nasa on Tuesday show a rapid thaw between 8 July and 12 July. Within that four-day period, measurements from three satellites showed a swift expansion of the area of melting ice, from about 40% of the ice sheet surface to 97%.

Scientists attributed the sudden melt to a heat dome, or a burst of
unusually warm air, which hovered over Greenland from 8 July until 16
July.

Greenland had returned to more typical summer conditions by 21 or
22 July, Mote told the Guardian.

But he said the event, while exceptional, should be viewed alongside
other compelling evidence of climate change, including on the ground
in Greenland.

"What we are seeing at the highest elevations may be a sort of sign of
what is going on across the ice sheet," he said. "At lower elevations
on the ice sheet, we are seeing earlier melting, melting later in the
season, and more frequent melting over the last 30 years and that is
consistent of what you would expect with a warming climate."

Zwally, who has made almost yearly trips to the Greenland ice sheet for more than three decades, said he had never seen such a rapid melt.

About half of Greenland's surface ice sheet melts during a typical summer, but Zwally said he and other scientists had been recording an acceleration of that melting process over the last few decades. This year his team had to rebuild their camp, at Swiss Station, when the snow and ice supports melted.

He said he had never seen such a rapid melt over his three decades of
nearly yearly trips to the Greenland ice sheet. He was most surprised
to see indications in the images of melting even around the area of
Summit Station, which is about two miles above sea level.

It was the second unusual event in Greenland in a matter of days, after an iceberg the size of Manhattan broke off from the Petermann glacier. But the rapid melt was viewed as more serious.

"If you look at the 8 July image that might be the maximum extent of warming you would see in the summer," Zwally noted. "There have been periods when melting might have occurred at higher elevations briefly – maybe for a day or so – but to have it cover the whole of Greenland like this is unknown, certainly in the time of satellite records."

Jason Box, a glaciologist at Ohio State University who returned on
Tuesday from a research trip to Greenland, had been predicting a big
melt year for 2012, because of earlier melt and a decline in summer
snow flurries.

He said the heat dome was not necessarily a one-off. "This is now the
seventh summer in a row with this pattern of warm air being lifted up
onto the ice sheet on the summer months," he said. "What is surprising
is just how persistent this circulation anomaly is. Here it is back
again for the seventh year in a row in the summer bringing hot, warm
air onto the ice sheet."

He also said surfaces at higher elevation, now re-frozen, could be
more prone to future melting, because of changes in the structure of
the snow crystals. Box expected melting to continue at lower
elevations.

About half of Greenland's surface ice sheet melts during a typical
summer, but Zwally said he and other scientists had been recording an
acceleration of that melting process over the past few decades. This
year his team had to rebuild their camp, at Swiss Station, when the
snow and ice supports melted.


Lora Koenig, another Goddard glaciologist, told Nasa similar rapid melting occurs about every 150 years. But she warned there were wide-ranging potential implications from this year's thaw.

"If we continue to observe melting events like this in upcoming years, it will be worrisome." she told Nasa.

The most immediate consequences are sea level rise and a further warming of the Arctic. In the centre of Greenland, the ice remains up to 3,000 metres deep. On the edges, however, the ice is much, much thinner and has been melting into the sea.

The melting ice sheet is a significant factor in sea level rise. Scientists attribute about one-fifth of the annual sea level rise, which is about 3mm every year, to the melting of the Greenland ice sheet.

In this instance of this month's extreme melting, Mote said there was evidence of a heat dome over Greenland: or an unusually strong ridge of warm air.

The dome is believed to have moved over Greenland on 8 July, lingering until 16 July.

This is all the white mans fault.

My guess is the above comment is a sarcastic comment from a white supremacist. The truth, however, in many ways, it mostly is the fault of rich white men.