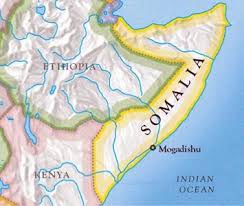 Who ordered the march back to the middle ages anyway?


The following is from Shabelle Media Network

Mogadishu — Fighters loyal to Al shabaab, which declared its allegiance to Al Qaeda, have imposed strict orders on Somali women in Afgoye corridor, where hundreds of thousands displaced by Mogadishu's protracted violence live, witnesses said on Sunday.
A witness woman, who spoke on condition of anonymity, told Shabelle the women were ordered to put on good veil that can cover all their bodies even when they are in homes, adding that every one is seen violating that order would be punished.
Early Sunday morning, pick-ups mounted with big speakers could been seen in the villages KM 13, Siinka Dheer, Elasha, Lafole and Arbska where a lot Somali displaced people resorted to lead.
Residents expressed a deep anxiety about the strict rules the Islamic group ordered villagers to put into practice.
Women are also ordered to not come out from their houses without an adult male who can take their responsibility.
Posted by Oread Daily at 4:04 PM