More and more people are finally getting the message.  Too much water here, drought there, forest fires here, tornadoes there...all that talk about how you can't blame any one event on global climate change is getting old.  Can you blame lots of events?  I think absolutely you can. 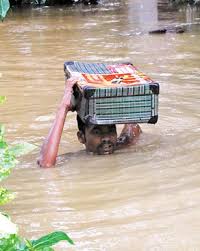 While you were reading about floods in Australia and mudslides in Brazil, Sri Lanka was suffering from a catastrophe. Gunavi Samarasinghe, the head of Meteorological Department in Sri Lanka now is saying, ""Global weather patterns are changing, we should be prepared for extreme changes."
So should we all.
The following is from IPS.
Extreme Weather Changes Could Follow Floods
By Amantha Perera

COLOMBO, Jan 18, 2011 (IPS) - Weather experts warned Sri Lankan to be prepared for extreme weather changes with hardly any notice following devastating floods here that have affected over one million people.

"Global weather patterns are changing, we should be prepared for extreme changes," Gunavi Samarasinghe, the head of Meteorological Department, said as the country battled floods in the east as temperatures island-wide dropped to sixty year lows.

The drop in temperature was caused by the cloud cover over the island, Samarasinghe said. Colombo registered a temperature of 18.8C, while the central Nuwera Eliya highlands fell to a single digit - 7C.

Samarasinghe said that the island was facing the La Nina phenomenon during which temperatures near the Equator have dropped by as much as 5C. "We better be ready to face any kind of weather," he said.

According to reports on Jan. 14, the two-plus weeks of flooding had killed 27 and left 12 missing. The Disaster Management Centre, the government body coordinating the flood relief effort said that over 18,000 houses, 200 small and large reservoirs and parts of 152 major and minor roads were in need of repair after the floods.

Samarasinghe’s assessment that extreme weather patterns were becoming common is substantiated by the growing frequency of flash flooding on the island.

Since May of 2010, the island has been ravaged by flash flooding on three occasions - marooning a total of 2.2 million persons. The largest and worst being the latest. In May 2010, over 675,000 were affected by flash floods in the western and southern regions, including the capital Colombo. Parts of the same area went under water in November leaving around 375,000 marooned.

By far the latest flooding has been most destructive, said Samarasinghe, claiming its aftermath was only second to the 2004 Asian tsunami.

The U.N.’s Global Disaster Alert and Coordination System rated it as an extreme event that is not likely to reoccur in another 100 years. Heavy rains between Dec. 26 and Jan. 11, caused havoc. Large reservoirs in Sri Lanka’s northern and central regions quickly reached spill levels and sluice gates were opened by the irrigation engineers to prevent the banks from bursting.

"This is monumental," said Upul Tammitta, an aide to Agrarian Minister S. M. Chandrasena, after he witnessed the sluice gates of the Nuwera Weva tank, a large reservoir in the north central Anuradhapura town being released. "I have never seen anything like this before."

He said that the when the water was released, some of it flowed on land where buildings had been built. "It looked like the tanks natural water flow had been blocked, at least when it reached spill levels."

This time the rains were so heavy - Batticaloa, an eastern town, received over 300 millimetres in one day, the highest in over 100 years - that with or without human interference the floods would have come.

Experts contend that at least some of the damage, especially in urban areas, could be mitigated if people paid attention to where and how they were building.

Most of the flash floods that the capital Colombo has experienced in the last six months have been blamed on human interference. Experts contend that blocked drainage networks as well as filled marsh land left rainwater with nowhere to flow, especially when the rains are extremely heavy.

"We have to seriously think about not blocking these networks, otherwise the rainwater has nowhere to go," Ananda Mallawatantri, assistant resident representative of the U.N. Development Programme (UNDP) warned when Colombo went under.

The UNDP has financed a 150,000-dollar clean up project that has cleared some of the water and drainage networks in the capital and suburbs that helped ease water flow. Soon after the November floods the government decided to widen several water tanks in areas closer to Colombo in an effort to mitigate future flooding. During heavy rains in mid-November some parts of the capital became virtually impassable with floodwaters clogging intersections and prompting massive traffic jams.

Engineers at the Irrigation Department have also proposed to widen or excavate water retention basins on higher ground, in an effort to slow down and control cascading flash floods following heavy rains. That plan is yet to be implemented. Even in rural areas construction and farmland continue to encroach into riverbeds.

The recurring floods have left steep recovery and assistance bills. In 2010 the government spent over 100 million rupees (over 1 million dollars) as assistance and for relief efforts during the floods.

The latest flooding is likely to add to the burden. The government had allocated over 200 million rupees for immediate assistance, but the long- term requirements appear to be higher given the scope of the devastation.

A rough estimate said that the damages from the latest floods would cost over 30 billion rupees.

As the enormity of the flooding became clear, the government made an official request to the UN for assistance. The World Food Programme (WFP) pledged food aid for 400,000 affected people worth 55 million rupees. The U.N. was expected to make a flash appeal to donors to secure funding for the flood relief - it said that funding was dangerously low and the WFP warned of relief drying out if immediate funding was )not received.

"We are discussing with the government on the extent of the damages. There will be medium and long-term impacts from the latest flooding. We have to be prepared for that," Barbara Manzi, the head of the U.N. Office for the Coordination of Humanitarian Affairs (OCHA) in Colombo said.

Chandrasena estimated that over 400,000 acres of paddy land was badly damaged by the recent floods. Two large paddy production bases, the Polonnaruwa and Ampara Districts were rendered almost impassable for at least two days at the height of the flooding. Vegetable prices are also spiking following the flooding.
Posted by Oread Daily at 3:56 PM