There is no capitalist "solution" to climate change. Continuous and expanding accumulation of capital is the lifeblood of capitalism and the deathbed of the planet.

FROM THE WORKERS SOLIDARITY MOVEMENT

The Economist gives up on halting Climate Change 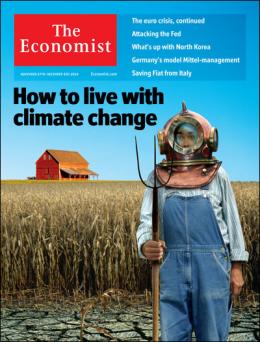 This weeks leads editorial in the international business magazine 'The Economist' shrugs its shoulders and walks away from the idea of controlling Climate Change. This is very significant for The Economist is not a climate change denial publication, for some time (at least as far back as 2006) it has accepted the scientific consensus that human caused Climate Change is a real process with extremely serious implications.  So it giving up the fight is a very big deal indeed, and one that contains serious lessons for the Climate Change reformists who continue to believe that if enough pressure is put on a deal can somehow be struck at five minutes to midnight.
The Economist is quite unpopular with the denialists because its a very 'respectable' business magazine without the slightest reek of Patchouli to it. Indeed it doesn't take long to find outraged climate change denial blogs that hate the Economist. They don't like this edition either because it acknowledges that Climate Change is happening but has just switched positions to saying "It won’t be stopped, but its effects can be made less bad." That by the way is literally the sub heading and the lead goes out to spell just what is meant by less bad.
The stated reason for the change of editorial line (always a big deal at the Economist, coming out against the Iraq War involved the previous pro-war editor stepping down) is the lack of interest in the forthcoming Cancun Climate Change summit. After saying this is in part because of the feeling that the failed Copenhagen summit was over hyped the Economist has to acknowledge that "there is a growing acceptance that the effort to avert serious climate change has run out of steam." The best it can go on to say is that "Perhaps, after a period of respite and a few climatic disasters, it will get going again"
The Editorial goes on the acknowledge the consequences of inaction, droughts in arid areas, floods in wetter areas and the "livelihoods of hundreds of millions, mostly in developing countries, at risk" leading to mass migration. Which leaves it stuck with advocating a more open migration policy (an idea where anarchists can agree but will also recognize that such a policy change will hardly result from widespread disaster that puts hundreds of millions on the move). And, err, development.
You should read the full editorial and like me I suspect you'll come away struck at just how weak the argument is.  Why publish it all you may wonder.
The problem for the Economist is that its a fan of mostly unrestricted free market capitalism and the idea that the market can somehow sort everything out. The COP process though has demonstrated that the market can not tackle Climate Change because the drive for profit militates against reaching any effective deal that could control CO2 releases. The Economist acknowledged this in part back in May when it wrote in another article that "However much bosses may care about the planet, they usually mind more about their bottom line, and when times are hard they are unwilling to incur new costs."  Yes quite, that could have come straight out of Workers Solidarity.
As a magazine that feels it needs to have an answer to all the worlds major issues this leaves the Economist rather stuck. So they have decided to have a go anyway and come out with something that can convince no one. There is no solution for the Economist because the only solution is a world where production for profit for the few is ended so that we can start to make rational decisions about what is produced and how that will be built around the environmental impact of production. The 'right' to pollute will no longer be treated as something that has no cost or a cost that can somehow be traded for an unrelated pile of dollar bills.
The implications for those who take Climate Change seriously are profound.  Above all else it shows why mistaking the importance of dealing with it as a reason to drop other struggles is a huge mistake.  Climate Change is not an isolated problem, it is an integral part of the way capitalism works.  The transformation required to create an economic system that can truly value the life sustaining properties of the environment is so complete that it requires a struggle against capitalism itself
Posted by Oread Daily at 3:33 PM