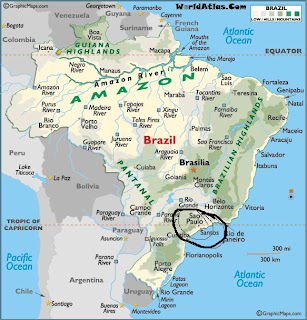 Hundreds of Brazilian women activists from the group Via Campesina today raided a research unit of U.S. agricultural biotech company Monsanto destroying a tree nursery and an experimental field of genetically modified corn.

Just how much of those fields were destroyed, and how, was still unknown, a Monsanto press agent said Friday.

There were no immediate reports of injuries in the invasion of the Monsanto farm about 200 kilometers (125 miles) from Sao Paulo, Brazil's largest city.

The women were angry over the Brazilian government's decision last month to give clearance for two varieties of GMO corn for commercial use.

The action happened four days after hundreds of members of the same group invaded a corporate tree farm owned Swedish-Finnish paper maker Stora Enso near Brazil's border with Uruguay to protest the planting of trees that are harvested to make pulp.

In that case, police fired rubber bullets to oust the demonstrators, triggering a series of protests throughout southern Brazil that they had employed excessive force.

A spokesperson for Via Campesina, a group defending peasants and land reform, told Reuters by telephone today, "The authorization of these varieties shows once more that (President Luiz Inacio Lula da Silva's) government favors agribusiness and big foreign companies, abandoning land reform and family farming." Last year, Via Campesina launched a similar campaign against a Syngenta Seeds (SYT) transgenic corn and soy research facility in Parana state in south Brazil, leading to the death of at least one activist by Syngenta contracted security guards.

The country’s National Biosafety Council decision permits the usage of two forms of GMC produced by Monsanto and Bayer called MON810 and LibertyLink, respectively (Last month French officials banned MON810 after a watchdog group said it had “serious doubts” over the GMC's safety).

At the time of the decision by the Brazilian government to allow the GMO corn Via Campesinareacted with fury. The group said the decision went against the advice of two governmental agencies: the health ministry's ANVISA health vigilance unit, and the environmental ministry's Ibama institute. In fact, Health Minister, José Gomes Temporao, a member of the Council wanted further studies on the possibility that these varieties of maize might be toxic or allergenic. Environment Minister Marina Silva, who opposes cultivation of transgenic species, chose not to even attend the meeting.

Via Campesina said the companies behind the engineered corn had presented studies that were "completely inadequate and insufficient to guarantee the safety of these products in terms of human health."

It said it also feared the man-made seeds would contaminate natural crops, with unpredictable results for the environment.

Via Campesina charges expanded use of genetically modified seeds harms Brazil's environment and makes it difficult for poor farmers to compete with the nation's rich landowners and agribusiness companies.

Commenting on the Council's decision, María José da Costa, of the Small Farmers Movement (MPA), told IPS, "We have lost some battles with the government before. But in our view, this is the greatest tragedy of the Lula government."

A letter from the Campaign for a GM-Free Brazil, reports ISP, said that sowing transgenic maize will inevitably contaminate native varieties of maize, which can be grown organically and are ecologically sound.

The measure, it said, is a "flagrant and unconstitutional imposition that sets the economic interests of companies interested in growing GM maize commercially above the health of the population, the need to protect the environment, and also the interests of farmers and consumers who do not want to plant or eat transgenic foods."

According to da Costa, considering the "harm done to people" due to soybeans and other transgenic crops in Brazil, "the disasters that will be caused by the authorisation of GM maize will be of far greater proportions."

She said that maize, in particular, which was first domesticated in Latin America, will now suffer "a great loss of biodiversity, as well as genetic degeneration and impoverishment."

She said that native seeds cultivated by small farmers and indigenous peoples "run the risk of disappearing through cross-contamination."

Unlike soybean plants which are almost entirely self-pollinating, maize is generally cross-fertilised, and its pollen "can be carried several kilometres and contaminate other types of maize at great distances, transported by insects and the wind," she said.

Furthermore, she said, farmers will have no legal recourse for any complaints against contamination of their crops, because jurisdiction is unclear.

And if contamination of their maize does occur, they will have to resort to other seeds, and they will become dependent on the transgenic species, because GM seeds are designed to produce a second generation of seeds that will not germinate.

"The food sovereignty of small farmer communities will be endangered, because they will have to buy seeds outside the community, and they will have to pay royalties to the transgenic seed companies," said da Costa. At present, farmers save their seed from year to year for the next planting.

She also called attention to the technical studies cited by the Science and Technology Ministry in support of the authorisation of transgenic maize, noting that most of them were carried out abroad, and fail to take into account the uniqueness of Brazil’s diverse ecosystems.

The following is from AFP.

Around 300 women rural residents in Brazil burst into a property owned by the US company Monsanto and destroyed a plant nursery and crops containing genetically modified corn, their organization said.

The women were protesting what they saw as environmental damage by the crops.

They trashed the plants within 30 minutes and left before police arrived at the site in the southern state of Sao Paulo, a member of the Landless Workers' Movement, Igor Foride, told AFP.

The Brazilian government had "caved in to pressure from agrobusinesses" by recently allowing tinkered crops to be grown in the country, he said.

In Brasilia, a protest by another 400 women from an umbrella group, Via Campesina (the Rural Way), was held in front of the Swiss embassy against Syngenta, a Swiss company that is selling genetically modified seeds in Brazil.

The demonstrators called attention to an October 2007 incident in which private guards working for Syngenta killed a protester taking part in an occupation of land owned by the company.

Via Campesina said in a statement that "no scientific studies exist that guarantee that genetically modified crops won't have negative effects on human health and on nature."

It added that on Tuesday, another 900 of its members had entered a property owned by the Swedish-Finnish paper giant Stora Enso and ripped out non-modified eucalyptus saplings they claimed were illegally planted.
Posted by Oread Daily at 4:10 PM