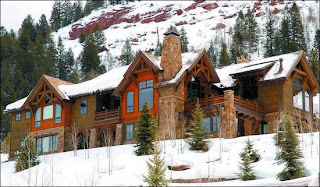 I'll just bet you don't own a second home on the slopes of the Rockies in Aspen. In fact, I'll just bet not one of the regular readers of the Oread Daily lives in Aspen at all. If you do, you probably should (or should not) be reading this article because it is about you.

Second-home investments, while a boon for the wealthy, can be the bane of people with modest incomes who live in towns like Aspen where prices skyrocket thanks to the second-home market. Often, longtime residents must decide between being renters forever, commuting long distances to work – or leaving altogether.

In fact, most of the people who do the real work don't even live in town of Aspen.

An increasing number of housekeepers, cooks and other workers who support Aspen’s resort economy are bused up Highway 82 every day from Rifle, Silt and New Castle to work for as little as $12 an hour.

In any event, the homes lost in Aspen to these new comers who buy them up as second homes (or just for the property to build new one) were once occupied by working families.

The children of the original owners can no longer afford the homes of their parents.

But, hey, that is just a problem for the locals, isn't it?

Anyway why should the rest of us give a hoot about those who actually get to live in the city itself and their problems. In fact, the median income for a family living there is $70,300.

Hang on, my friends, there is indeed a reason.

The rich and the famous who occupy these vacation homes in Aspen are often good liberals who would tell you of their concern for the planet.

They, along with their not quite as wealthy friends who live there full time would shake their heads if told their placid little town was spewing all sorts of harmful substances into the atmosphere. I mean, come on, there is no real industry there.

No big factories, but Aspen has more large luxury homes per capita than just about anywhere on earth. And the lifestyle of those who live in these homes feasts on fossil fuels more heavily than in other parts of the country.

"Some snowmelt systems can use as much energy, if not more, to heat the driveway as to heat the house," Richardson told the Aspen Times Weekly.

Then there are the habits of some people with money to burn. Many Red Mountain mansions stay lit up at night even though no one has stayed in them for weeks. Thermostats keep the empty edifices at a cozy 72.

"I don't think there's a code in the country that regulates how much energy a house can use," said Richardson.

An analysis done by the Sopris Foundation entitled "Anybody home" found:

"Many vacation homes are set to run warm in winter and cool in summer: the hot water heater is often on year-round, the one or two or three refrigerators keep things(or nothing at all) cool, the wine collection up to spec, the security and ventilation systems on, and exterior and interior lighting to simulate occupancy.

Many of these uses are important for security; many energy demands are unnecessary and egregious: driveway heating, roof melt systems, hot tubs, towel bar heaters, 24/7 exterior lighting... Excessive energy consumption, often with no comfort or security benefits, represents a problem for a community that aims to reduce community energy intensity and emissions of greenhouse gases."

So while you and I are asked continually to conserve, the rich who populate not just Aspen, but all the places like it, go on about their merry business blissfully changing our planet forever and ever.

While all across this land of ours people approach their utility bills with dread, these beautiful people could give a hoot. They've got money to burn and by god they intend to burn it.

But that's a perk for being rich, after all.

With their heated driveways, outdoor hot tubs and 24-hour surveillance systems, Aspen's vacation homes each use more electricity than a block of average American homes, a new study reports.

As a result, the luxurious second homes generate most of the town's residential greenhouse gases, even though many of them are occupied only a few weeks each year.

They emit more carbon than Aspen's fully occupied homes, according to the study by the Sopris Foundation.

"I suppose if you make a million dollars or more, and there are several people in Aspen who do - many, actually - you can afford the utility bills," said Richard Heede of Climate Mitigation Services, who conducted the study.

Still, Heede was surprised to find that second homes generate 61 percent of the town's residential carbon dioxide emissions - the main man-made greenhouse gas - even though they are unoccupied an average of 277 days a year.

Aspen vacation homes each generate 43.8 tons of carbon dioxide a year compared with 32.4 tons by each full-time, single-family residence, the report calculates.

The average U.S. household with four people generates between 30 and 40 tons of carbon dioxide a year, depending on elements such as its type of heating fuel, according to the federal Environmental Protection Agency's carbon calculator.

Aspen's vacation homes are often much larger than locally owned homes and use, even when empty, as much energy as full-time residences, Heede said.

"Many energy demands are unnecessary and egregious, such as driveway heating, roof-melt systems, hot tubs (and) towel-bar heaters," he said.

Then there are the whirring motors of cigar humidors and wine cellars, and the flicking on and off of 24/7 floodlights, the report says.

While disproportionate energy use in second homes exists in every mountain-resort community, it is most pronounced in Aspen, where conspicuous consumption is a status symbol and there are 150 homes exceeding 10,000 square feet.

The average single-family home in Aspen is 3,272 square feet, according to the report.

Linda Venturoni, who conducted a study of the economic and social impacts of second homes for the Northwest Colorado Council of Governments, said monstrous manses continue to sprout from Telluride to Winter Park.

"A lot of those resort communities are starting to catch up," she said.

Environmental consciousness, however, appears to be growing even among the ultra- rich, who increasingly seek energy-efficient, green-built homes.

"Nobody wants their vacation home to idle inefficiently when they're not there," he said. "They didn't get rich by flushing 10 months' worth of energy costs down the toilet."

Officials in Aspen now require renewable-energy fees for new houses bigger than 5,000 square feet or those that exceed their "energy budgets" under the building code, and they are considering mandatory energy audits for existing homes when they are sold.

"We are definitely aware of the fact that Aspen residential- energy use is higher than the national average," said Calla Ostrander, a staff member with the Canary Initiative, the ski town's pioneering broad-scale effort to reduce greenhouse gases. "This just helps raise awareness," Ostrander said.

Worried that global warming is leading to major climate changes that could dramatically curtail the ski season over the next 50 years, Aspen has taken aggressive steps to set a good example and raise environmental awareness.

The city now generates more than 70 percent of its power from renewable energy, and this week officials began selling carbon credits that allow residents to fund renewable-energy projects to offset the carbon generated through consumption of fuel and other goods.

While transportation - particularly air travel - is the single greatest generator of greenhouse gases in town, second homes are perhaps the most visible and vilified contributors, and are viewed by critics as a symbol of gluttony and decadence.

Even "green" second homes, they argue, are excessive and consume natural resources in construction and energy requirements.

Heede was cautious to point out that nearly every resident in Aspen could cut down on greenhouse-gas emissions and make his or her home more energy-efficient.

"We're not just singling out the second home owner living in the most monstrous homes and here only at Christmas and in June," Heede said. "We're just saying maybe we should look under our feet and do what we can to help."
Posted by Oread Daily at 11:26 AM