WHAT'S FOR DINNER MAY END UP KILLING US ALL 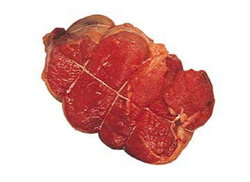 The only meat I have eaten since New Year’s Eve 1979/1980 has been fish (which I consider for me to be kind of the equivalent of methadone if you catch my drift, although a lousy deal for the fishes). While not eating meat has been good for my health it wasn’t really the reason I stopped the BBQ chicken and the like. I stopped because I could no longer turn a blind eye to what eating meat actually meant. It meant the killing, the totally inhumane killing in fact, of gazillions of animals who had just as much right to exist as I did. I mean how could I look my dog in the eye and then go out and eat a cow.

Be that as it may, it turns out that not eating meat (I know – the fishes – I’m bad) actually coincides with another of my overarching concerns – global warming. I never even thought much about the connection until I read the article below. Call me slow, but whatever.

The following was taken from E Magazine.com

Another Inconvenient Truth: Meat is a Global Warming Issue
By Dan Brook

Al Gore’s movie (and book), An Inconvenient Truth, is playing to rave reviews. His laudable project is an urgent message on the vital issue of global warming. We all must heed the call.

If we didn’t realize it already, we now know that we are overheating our planet to alarming levels with potentially catastrophic consequences. 2005 was the hottest year on record. Think of an overheated car; now imagine that on a planetary scale.
Organizations from Greenpeace to the Union of Concerned Scientists, World Bank and the Pentagon, all agree that global warming is, perhaps, the most serious threat to our imperiled planet. The Pentagon report, for example, states that climate change in the form of global warming “should be elevated beyond a scientific debate to a U.S. national security concern,” higher even than terrorism.

The effects of global warming are not hypothetical: waves are already washing over islands in the South Pacific, coastal cities and low-lying countries face severe flooding, extreme weather conditions like hurricanes are intensifying, the polar ice caps and the world’s glaciers are melting, polar bears and other species are threatened with extinction, diseases are spreading more easily, crop failures are mounting. We are standing at a precipice.

There are many human activities that contribute to global warming. Among the biggest contributors are electrical generation, the use of passenger and other vehicles, over-consumption, international shipping, deforestation, smoking and militarism. (The U.S. military, for example, is the world’s biggest consumer of oil and the world’s biggest polluter.)

What many people do not know, however, is that the production of meat also significantly increases global warming. Cow farms produce millions of tons of carbon dioxide (CO2) and methane per year, the two major greenhouse gases that together account for more than 90 percent of U.S. greenhouse emissions, substantially contributing to “global scorching.”

According to the United Nations Environment Programme’s Unit on Climate Change, “There is a strong link between human diet and methane emissions from livestock.” The 2004 State of the World is more specific regarding the link between animals raised for meat and global warming: “Belching, flatulent livestock emit 16 percent of the world’s annual production of methane, a powerful greenhouse gas.”
The July 2005 issue of Physics World states: “The animals we eat emit 21 percent of all the CO2 that can be attributed to human activity.” Eating meat directly contributes to this environmentally irresponsible industry and the dire threat of global warming.

Additionally, rainforests are being cut down at an extremely rapid rate to both pasture cows and grow soybeans to feed cows. The clear-cutting of trees in the rainforest — an incredibly bio-diverse area with 90 percent of all species on Earth — not only creates more greenhouse gases through the process of destruction, but also reduces the amazing benefits that those trees provide. Rainforests have been called the “lungs of the Earth,” because they filter our air by absorbing CO2, while emitting life-supporting oxygen.

“In a nutshell,” according to the Center for International Forestry Research, “cattle ranchers are making mincemeat out of Brazil’s Amazon rainforests.”
Of course, the U.S. should join the other 163 countries in ratifying the Kyoto Protocol. Of course, we should sharply reduce our reliance on fossil fuels and shift towards renewable sources of energy. Of course, we need to stop destroying the rainforests. Of course, we need to stop the war in Iraq and drastically reduce the U.S. military budget (presently at half of the entire world’s total military spending), which would increase, not decrease, national and global security. But as we’re struggling and waiting for these and other structural changes, we need to make personal changes.

Geophysicists Gidon Eshel and Pamela Martin from the University of Chicago concluded that changing one’s eating habits from the Standard American Diet (SAD) to a vegetarian diet does more to fight global warming than switching from a gas-guzzling SUV to a fuel-efficient hybrid car. Of course, you can do both — and more! It has been said that “where the environment is concerned, eating meat is like driving a huge SUV.... Eating a vegetarian diet is like driving a mid-sized car [or a reasonable sedan, according to Eshel]. And eating a vegan diet (no dairy, no eggs) is like riding a bicycle or walking. Shifting away from SUVs and SUV-style diets, to much more energy-efficient alternatives, is key to fighting the warming trend.

Global warming is already having grave effects on our planet and we need to take action. Vegetarians help keep the planet cool in more ways than one! Paul McCartney says, “If anyone wants to save the planet, all they have to do is just stop eating meat. That’s the single most important thing you could do.” Andrea Gordon, in her article “If You Recycle, Why Are You Eating Meat?” agrees: “There is a direct relationship between eating meat and the environment. E Magazine asked the same question in its cover story, “So You’re an Environmentalist. Why Are You Still Eating Meat?” Quite simply, you can’t be a meat-eating environmentalist. Sorry folks.”

Vegetarianism is literally about life and death — for each of us individually and for all of us together. Eating animals simultaneously contributes to a multitude of tragedies: the animals’ suffering and death; the ill-health and early death of people; the unsustainable overuse of oil, water, land, topsoil, grain, labor and other vital resources; environmental destruction, including deforestation, species extinction, mono-cropping and global warming; the legitimacy of force and violence; the mis-allocation of capital, skills, land and other assets; vast inefficiencies in the economy; tremendous waste; massive inequalities in the world; the continuation of world hunger and mass starvation; the transmission and spread of dangerous diseases; and moral failure in so-called civilized societies. Vegetarianism is an antidote to all of these unnecessary tragedies.

The editors of World Watch concluded in the July/August 2004 edition that “the human appetite for animal flesh is a driving force behind virtually every major category of environmental damage now threatening the human future — deforestation, erosion, fresh water scarcity, air and water pollution, climate change, biodiversity loss, social injustice, the destabilization of communities and the spread of disease.” Lee Hall, the legal director for Friends of Animals, is more succinct: “Behind virtually every great environmental complaint there’s milk and meat.”

DAN BROOK is a writer, activist and instructor of sociology at San Jose State University and author of Modern Revolution (University Press of America, 2005). He welcomes comments via Brook@california.com.
Posted by Oread Daily at 1:43 PM