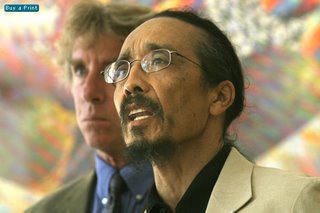 In 1973, Chicano activist and lawyer Francisco "Kiko" Martinez was indicted in Colorado on trumped-up bombing charges and suspended from the bar. He was forced to leave the United States for fear of assassination by police directed to shoot him "on sight." When Martinez was eventually brought to trial in the 1980s, many of the charges against him were dropped for insufficient evidence and local juries acquitted him of others. One case ended in a mistrial when it was found that the judge had met secretly with prosecutors, police, and government witnesses to plan perjured testimony, and had conspired with the FBI to conceal video cameras in the courtroom.

The government wasn't done with him though.

Kiko's name was added to the FBI terrorist-watch list after 9/11 and harrassement ensued. Kiko has been stopped and detained by police in three states.

Now he has filed a law suit challenging the government's ability to detain him.

The Denver Post reports that Kiko was stopped first in Colorado, then in Illinois and New Mexico. Police stopped Martinez on traffic violations and held him without a warrant for hours, in one case handcuffing him and placing him in a locked police car, while they checked his status with federal counter-terrorism officials, the lawsuit alleges.

"We're challenging their ability to subject him to de facto arrests. They're not just tracking him," attorney Richard Rosenstock of Santa Fe said after filing the 17-page complaint reports the Post.

"What if his turning signal stops working? He could be held for hours. ... How many times do they get to stop him?"

"I believe this illegal government conduct represents an even greater loss of freedom than the warrantless telephone surveillance we have all heard about," said Martinez, a civil rights attorney who lives in Alamosa, Colorado.

The following is from the Santa Fe New Mexican.

An activist attorney from Colorado filed suit against law-enforcement officials Thursday, alleging he was illegally detained at traffic stops in New Mexico and two other states because his name is on an FBI terrorist-watch list.

Martinez alleges in his suit that his constitutional rights were violated during traffic stops in Pueblo, Colo., in 2000; in Illinois in 2004; and on a stretch of N.M. 84/285 that runs through Pojoaque Pueblo in April 2005.

In all three incidents, Martinez contends, law-enforcement officers detained him without probable cause or reasonable suspicion that he had committed a crime. Martinez, 59, is seeking unspecified damages and attorney fees in his lawsuit.

He acknowledged Thursday that winning the suit would be difficult but also said he isn't willing to back down. "There's some serious principles involved, and we're not going to yield," Martinez said at a news conference at the Capitol.

Pojoaque Pueblo Gov. George Rivera did not immediately return telephone calls seeking comment. Spokesmen for the FBI and the state Department of Public Safety, which oversees the State Police, said they could not comment on pending litigation.

Martinez describes himself in the suit as a "longtime and vocal public advocate for the rights of Hispanic peoples and others" and alleges the FBI placed him on a terrorist-watch list in retaliation for his political beliefs or associations.

He said at the news conference he didn't know exactly why he was placed on the watch list but suspects his political activism was behind it. Martinez said his clients have ranged from prisoners to community groups. "I've willingly represented those people, and in the course of that representation, I've gotten myself some enemies because I don't bend over easily," he said.

In 1973, Martinez was charged with mailing package bombs in Denver to a police officer, a school-board member and a motorcycle shop. He was a fugitive in Mexico until 1980, when he was taken into custody while attempting to cross the border into Arizona.

Many of the criminal charges relating to the mail-bombs and the border crossing were dropped because of insufficient evidence, and juries acquitted Martinez on the other counts.

His lawsuit says he was returning home after giving a speech at The University of New Mexico on April 19, 2005, when Schultz pulled him over for speeding.

Another tribal police officer and Garcia then arrived at the scene, and Schultz told Martinez he thought Martinez had drugs and weapons, and asked to search his car, according to the lawsuit. After Martinez refused, the suit says, Garcia and Schultz forced him to spread his arms and legs for a pat-down search. The lawsuit alleges Garcia and Schultz threatened to seize Martinez's car, then handcuffed him and kept him in a police car.

Garcia and Schultz released Martinez after about an hour but not before Garcia told him that the next time, they would "get him," according to the lawsuit.

"When I was by myself in the middle of the night, I was fearful. I really thought that something was going to happen that night," Martinez said Thursday.

Daniel Yohalem, one of two Santa Fe attorneys representing Martinez, said there are likely thousands of people on the FBI watch list who have no idea how they got on it. "It's an incredibly Kafka-esque situation," Yohalem said.

The case has been assigned to Judge John Conway, according to Martinez's attorneys.
Posted by Oread Daily at 12:55 PM

They're not just tracking him," attorney Richard Rosenstock of Santa Fe said after filing the 17-page complaint reports the Post.
rio-arriba