MALALAI JOYA: "THEY CAN KILL ME BUT THEY CANNOT KILL MY VOICE." 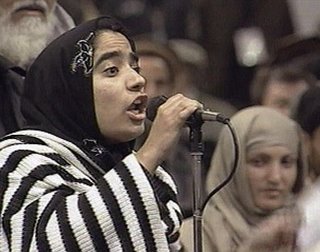 Malalai Joya , 27, a member of Afghanistan's parliament and a former refugee turned activist, is determined to tell it like it is, regardless of the risks and fear.

Joya was physically and verbally assaulted during a parliament session yesterday when she denounced certain warlord members of that body. It wasn't the first time.

Malalai Joya was elected to the 249-seat National Assembly, or Wolesi Jirga in September 2005, as a representative of Farah Province. Malalai won the second highest number of votes in the province.

Malalai Joya rose to fame in December 2003 when, as an elected delegate to the Constitutional Loya Jirga, she spoke out publicly against the domination of warlords. Since then she has survived four assassination attempts, and travels in Afghanistan under a burqa and with armed guards.

She is the daughter of a former medical student who was wounded while fighting against the Soviet occupation of Afghanistan. Malalai was 4 years old when her family fled Afghanistan in 1982 to the refugee camps of Iran and then Pakistan. She finished her education in Pakistan and began teaching literacy courses to other women at age 19. After the Soviets left, Malalai Joya returned to Afghanistan in 1998 during the Taliban's reign. During that time she established an orphanage and health clinic, and was soon a vocal opponent of the Taliban.

In her speech yesterday she declared that there were “two types of Mujahidin — one who were really Mujahidin, the second who killed tens of thousands of innocent people and who are criminals”.

That was too much apparently for the guys.

After the attack she told the Times of London, “I have lots of threats. I have had people call me to threaten me, and in Kabul have to stay in a different house every night. I don’t feel safe. I’m never scared because I tell the truth and I believe in the truth and in democracy. They can kill me but they cannot kill my voice.”

The following is from AFP via Afghan News Network.

Former warlords in Afghanistan's parliament hurled water bottles and rushed at a woman MP after she accused them of being involved in the deaths of thousands of people.

Malalai Joya said bearded and turbaned MPs who were once warlords in the country's decades of conflict had to be restrained from physically attacking her after a heated session of the four-month-old parliament.

The uproar, in which several MPs rose from their chairs shouting, was shown on television. A cameraman from a private television station said one of the MPs had slapped him across the face while he was filming the scuffle.

Joya, who has had death threats against her after a similar outburst during a meeting to draw up a post-Taliban constitution in 2003, alleged that she had heard a prominent former warlord telling his men "to stab me with a knife".

"Several of them threw water bottles at me and many others rushed towards me to beat me up," she said in an interview with AFP afterwards.

Joya, in her late 20s, said the MPs had reacted angrily to her statement that some of the men who led the resistance to the 10-year Soviet occupation were responsible for the deaths of thousands of civilians in a civil war that erupted after the Soviet withdrawal in 1989.

Her comments were made in a debate about the anniversary last month of the defeat of communism in Afghanistan in 1993 when the government that replaced the Soviet administration was toppled.

"I told them that we have two types of mujahedin -- one who were really mujahed (holy warriors) the second, those who killed tens of thousands of innocent people and who are criminals. My words sparked their anger," she said.

The civil war ended with the 1996 takeover of the extremist Taliban regime that was ousted in late 2001 by a US-led coalition.

Joya caused a similar outburst at a 2003 constitutional Loya Jirga, or traditional gathering, when she said the once-powerful warlords involved in atrocities in the war deserved punishment.

Delegates rushed at her, yelling "Allahu akbar" (God is the greatest) and demanding her expulsion, and had to be kept back by soldiers.

The incident catapulted Joya into the international spotlight that was on the country as it emerged from the oppression of the Taliban, which kept women behind doors and barred them from political and economic activities.

The parliament, inaugurated in December after the first general parliamentary election in around 30 years, is dominated by former mujahedin but includes MPs eager to push the country along the road to democracy.
Posted by Oread Daily at 2:33 PM