ANTI-WAR GROUP TO GIVE FBI A HELPING HAND 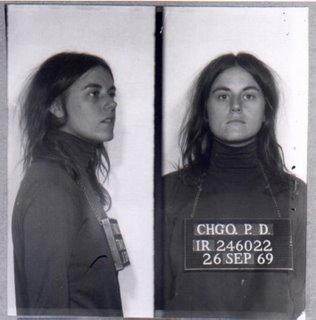 There is indeed something new under the sun every day. It's always a good thing when someone somewhere comes up with something new in the world of protest. I mean how many times can we listen to the same old chants. Check out what they got planned in Michigan.

Bernardine, I'm sorry but I couldn't help using the picture to the left. Fortunately, I know your sense of humor.


The following is from the Ann Arbor News.

Local peace activists plan to 'turn themselves in'

A local peace group is offering a pre-emptive strike in response to domestic spying programs and, in particular, to revelations Tuesday that federal investigators targeted an organization because of its anti-war views.

Ann Arbor-based Michigan Peaceworks will be taking mug shots of willing attendees at this Sunday's protest rally and march through downtown Ann Arbor. The protest commemorates the third anniversary of the war in Iraq.

The pictures, along with placards labeled "war protester,'' will be delivered to U.S. Department of Homeland Security officials at the Ann Arbor Federal Building at a later date as part of the group's "turn yourself into the National Security Agency'' initiative.

"We want to save them the effort, and show them who we are,'' said Peaceworks Director Phillis Engelbert, adding that protesters will be encouraged to save taxpayer money and ease the workload of NSA agents by turning themselves in.

The U-M College Democrats and Veterans for Peace are also sponsoring the protest.

Ann Arbor is among more than 400 cities nationwide where anti-war actions are scheduled for Sunday, said organizers, who expect hundreds of students and community members from southeast Michigan to attend.

Engelbert said participation might increase this year due to the unveiling of the Bush administration's domestic surveillance program, but she does not expect security measures or scrutiny from federal authorities to change much.

Both uniformed police and plainclothes officers have rerouted traffic and provided security at previous anti-war marches downtown, and federal authorities have historically videotaped rallies around the federal building downtown. Local FBI officials declined to say whether or not they'll be monitoring Sunday's protests.

"As far as we're concerned we have no interest in people exercising their first amendment rights,'' said Senior Special Agent Greg Stejskal.

Documents released Tuesday by the American Civil Liberties Union show that the FBI investigated gatherings of the Thomas Merton Center for Peace & Justice in Pittsburgh because the organization opposed the Iraq war, both groups alleged in a written statement released Tuesday.

An FBI memo indicates the classified investigation began in November 2002 and noted that the center distributes leaflets opposing the war in downtown Pittsburgh. The FBI notes that the Merton Center "is a left-wing organization advocating, among many political causes, pacifism,'' according to the statement.

The FBI said in a written statement that the agent who photographed the protesters was "acting with all appropriate investigative authorities'' as part of an ongoing terrorism probe. The photos were destroyed once the agent determined that a person under investigation was not in attendance at the event, the FBI said.

Though the government previously acknowledged retaining files on anti-war groups, the documents are the first indicating the rationale for investigating certain targets.

The ACLU has filed Freedom of Information Act requests in 20 states on behalf of more than 150 organizations and individuals.

Engelbert said the Michigan chapter filed Freedom of Information Act requests on behalf of several grass-roots organizations concerned about domestic surveillance last year, including Peaceworks. Two organizations were determined by the FBI as threats: Direct Action, a Lansing-based peace group, and the civil rights group BAMN or By Any Means Necessary. But no documents concerning Peaceworks were found.

"It's just luck of the draw. Because if that group (in Pittsburgh) was on their radar for being pacifists there's no reason to believe they wouldn't look at us, too,'' she said. "What it does is make people fearful of getting involved.''
Posted by Oread Daily at 10:27 AM